Confidence (and some flattery)

At the start of each Torchlight, we have "Role Calls" during which each cabin tells a joke or sings a song.  When we have combined Torchlight (like tonight), only the youngest cabins (Riggabamboo for the girls, Real Men for the boys) share a role call.

Tonight, the Real Men were charmers prior to "Abduction" night.

"You abducted our hearts, but we don't want them back!!" They then gave a big wink (or as close as they could manage - a 7 year-old wink is a pretty amusing sight).

There are few joys as nice as watching your wife blush at the flattering of 6 and 7 year-olds! 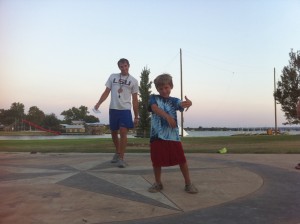 Tomorrow is Picture Day, so we had a smile contest to show everyone what they should do.  The picture above is from a camper who clearly thought it was a style contest and not a smile contest.  But I like his confidence!

Susie Ma'am saw a second year camper in the Ill Eagles Nest (our Health Center) who was soaking an ankle.

Susie Ma'am asked what had happened and got a lovely response.

"I rolled my ankle stepping on a life jacket, but it was worth it because I overcame a fear!"

[Note: As Susie Ma'am was telling the story, I could not wait for the explanation of this cryptic statement.  My mind raced.  What fear could she have overcome?  A massive phobia of flotation devices (buoyancyphobia?!?)?  A deep dread of swollen ligaments?  What might it be?

Back to the story.]

". . . it was worth it because I overcame a fear.  In fact, I overcame two fears.  First, I have never gone on the rope swing and I did it.  Second, I was worried about the Glob, and I did it too!  It took me two summers, but I did not want to go home without trying them both.  I really regretted not trying last year."

I love this story for several reasons.

First, I love that she overcame the fear.  She will wake up tomorrow more confident and capable than she woke up today.  She knows that hers fears do not define her.

Second, by knowing that she went 5 weeks without doing it, I know that the counselors are not pushing the campers beyond their limits.  One of the important balancing acts of camp is finding the right combination of challenging campers to do new things and letting them do so on their own schedule.   If you never challenge them, you miss great opportunities for growth.  If you push too hard, you can intimidate a child.  Hearing this story, I can picture supportive counselors talking with her about taking "reasonable risks" while letting her know that she is loved regardless of her decision.

Third, it gave me a good story to share with you!

Susie Ma'am likes to share a story about overcoming her own fears and avoiding regrets.

8 years ago, she and I went to New Zealand.  We both have a "healthy respect for heights" but I chose to bungee jump while she passed.  Later at camp, she would share with the campers that she wished at the time (and often since) that she had tried it.

She hated feeling regret and hated even more the idea that she let her fear define her.  She publically pledged at Vespers that if we ever went back, she would do it.

Perhaps she thought this a safe pledge.  At the time, we had no plans to go back, but in 2008, we returned with our four children.

There we"re moments that she was not happy that she had made this commitment to the girls.  She wanted to find a reasonable reason to pass. [Note, many were available to her, the best being I am not as crazy as my fool husband".]  But when we got to Queenstown, she jumped proudly and, might I add, beautifully.

Her message was not that it is bad to have fears.  Nor was she telling people that they should bungee jump.  Instead, she wanted all the campers to know that courage feels better than regret.