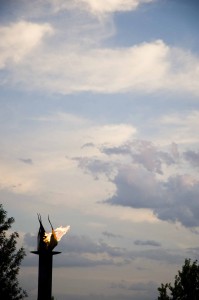 Several years ago, we had some parents contact us with questions about Torchlight, our evening ritual.  With this in mind, we decided to provide a little bit of an explanation about this important camp tradition.

[Note: This is an email that describes Torchlight in a typical summer.  We are varying it this summer (see the blog tomorrow), but we want you to at least know the basics of the tradition.]

Every evening we have a “Torchlight” ceremony.  Most nights (usually 5 per week), the girls and boys are separate; we do unified ceremonies on the other nights.  Once we take roll call (consisting of each division doing a brief call-and-response or song), we sing our “Torchlighter Song” as the Torchlighter of the evening brings in a handheld torch and lights our large torch.

Torchlighters are nominated and discussed by the counselors in daily meetings. The counselors nominate campers that have embodied the values of a “Champion”, including the 4 Rs (respect, responsibility, taking reasonable risks and reaching out to others).

When the Torchlighter comes in with the torch, he or she is escorted by 2 people: a member of the leadership team and a member of the “Lifetime Torchlighter’s Club”, or LTC.  An LTC is a camper or counselor that has been named Torchlighter in three different summers.  Once this happens, that camper becomes an “LTC” and is no longer eligible to be a Torchlighter.  Instead, LTCs become the escorts.  We do this so that we can recognize more campers.

The fact that we have a limited number of LTCs means that they will be escorts several times.  This might look like we are honoring the same campers, but this is not the case.  In fact, we had a parent ask why we were recognizing the same girls the day after a 6th summer camper made torchlight for the first time.  This parent had seen the LTC and thought she was also a Torchlighter.  I hope this helps clarify.

I would like to share a final thought.  The term is too short and we have too many campers worthy of recognition.  In other words, we would need a term that lasted for months to recognize every worthy camper.  Some ask why then do we do it?  I think there are important lessons here.  First, we reinforce our values by recognizing individuals who exemplify them.  Second, the campers get an opportunity to celebrate the success of others.  Too often, we want to focus on ourselves and miss the generosity of spirit necessary to be happy for another person.  Finally, it provides an opportunity to model perseverance.  Each summer we have had people make Torchlighter for the first time in their 7th, 8th or 11th summer (the last case was a long-time camper-counselor who made Torchlighter during counselor orientation).  These are stories of Champions that every camper can learn from!