We were there for three reasons.

With that explanation, let me share my top thoughts from the experience in Russia.

Other Countries See Camp as Education More than Recreation

While many Americans think that the main goal of camp is fun, other countries see it as an important and different way to impact their children.

Does Anybody Really Care What Time It Is? The Russians Do Not.

The classic 1969 Chicago song asks, “Does anybody really know what time it is, does anybody really care?” This song haunted me all week because we discovered that the Russians see schedules as mere suggestions and not anything to adhere to. Let me share two examples.

On the final night, the Congress schedules a 2-hour gala featuring dancing, singing, musical performances, speeches and much formality. Think of it as being like all the parts of the Olympic closing ceremony that you do not want to see – dignitaries thanking dignitaries who thank other dignitaries. Just as the Olympics passes the Olympic Flame from one host country to the next one, the Butterfly of Peace was passed from Russia to China. Butterflies are not fast fliers, but I never expected it to take 30 minutes for it to fly from the Russian ambassador to the Chinese one.

The 2-hour gala took 3+ hours. But that is not even the best/worst part.

The event started 40 minutes late. The room was packed with 1200 people for a full 45 minutes before the event began. The reason for this delay had nothing to do with tech challenges or bad traffic. Nope. The head of the Russian delegation decided at 7:30 (a scant 30 minutes before the gala) to invite a dozen people to join him for dinner. The gala started at 8:40 (rather than 8:00) to assure that they could finish their meal.

The second example of the laissez faire approach to time was my own speech. I was scheduled to speak on the main stage at 3PM on the last day. I arrived at 2:30 for a mike check. I arrived to see a group of 40 people practicing a dance they would be doing at 5:30. I watched as they practiced methodically. I began to wonder whether they would conclude before my speech was to begin. To my relief, they concluded at 2:56. I breathed a sigh of relief.

It was then that a second group of 40 dancers became to practice.

Stunned, I waited for someone to ask them to leave.

At 3:06, Susie walked into the arena. She was the first to arrive. She then explained that the dance troupe had cordoned off the door using those tape barriers that you see in airports. Apparently, people had approached the arena, seen the barrier, heard the loud music, and left.

I eventually found someone in charge. She profoundly apologized, cleared the door and instructed the dancers to leave. My talk started 20 minutes late. On the bright side, we ended up with almost 100 people in attendance despite the odd start.

I plan to write a separate blog about this woman (“Unstoppable Tracy”), but she was an inspiration to all of us. She was born without legs and only one half of one hand. Despite these severe challenges, she has competed in para-skiing, mountain climbing, deep sea diving and world cup sailing.

She also says that a camp experience at age 11 helped her realize that she could overcome amazing adversity. She modeled grace and humor. We spent a full hour talking with her about her struggles and about her amazing mother (imagine the courage that enabled her to support her daughter through so many tough times). Here she is with Susie and myself.  By the way, she suggested this pose. 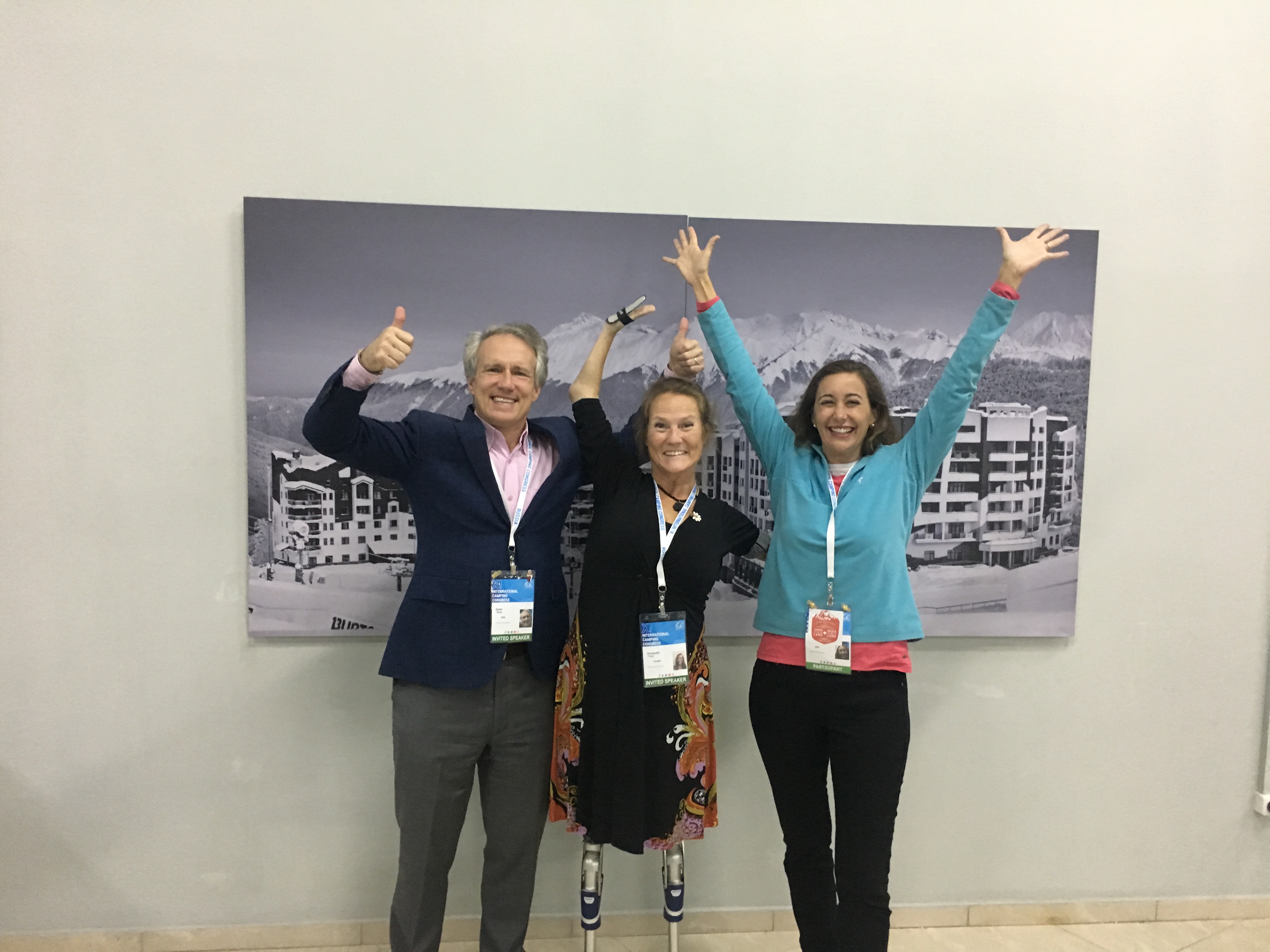 Earlier, I alluded to the fact that being the US ambassador was not the most dignified experience. Let me explain why.

On the next to last night, each country makes a cultural presentation. The small Pakistan delegation sang a folk song from their country. 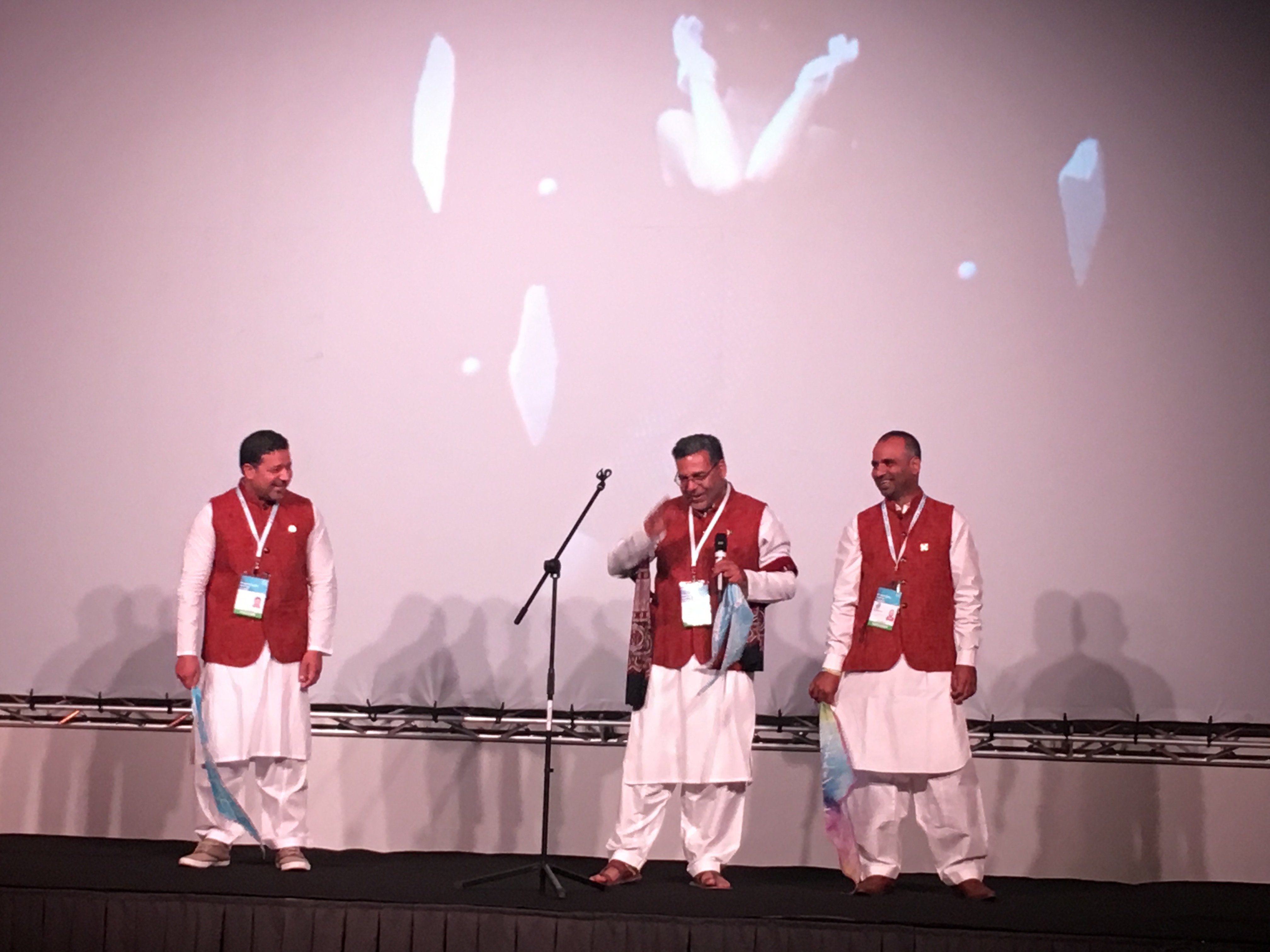 The Nigerian delegation dance and sang. Oh, and also showed off the best outfits. 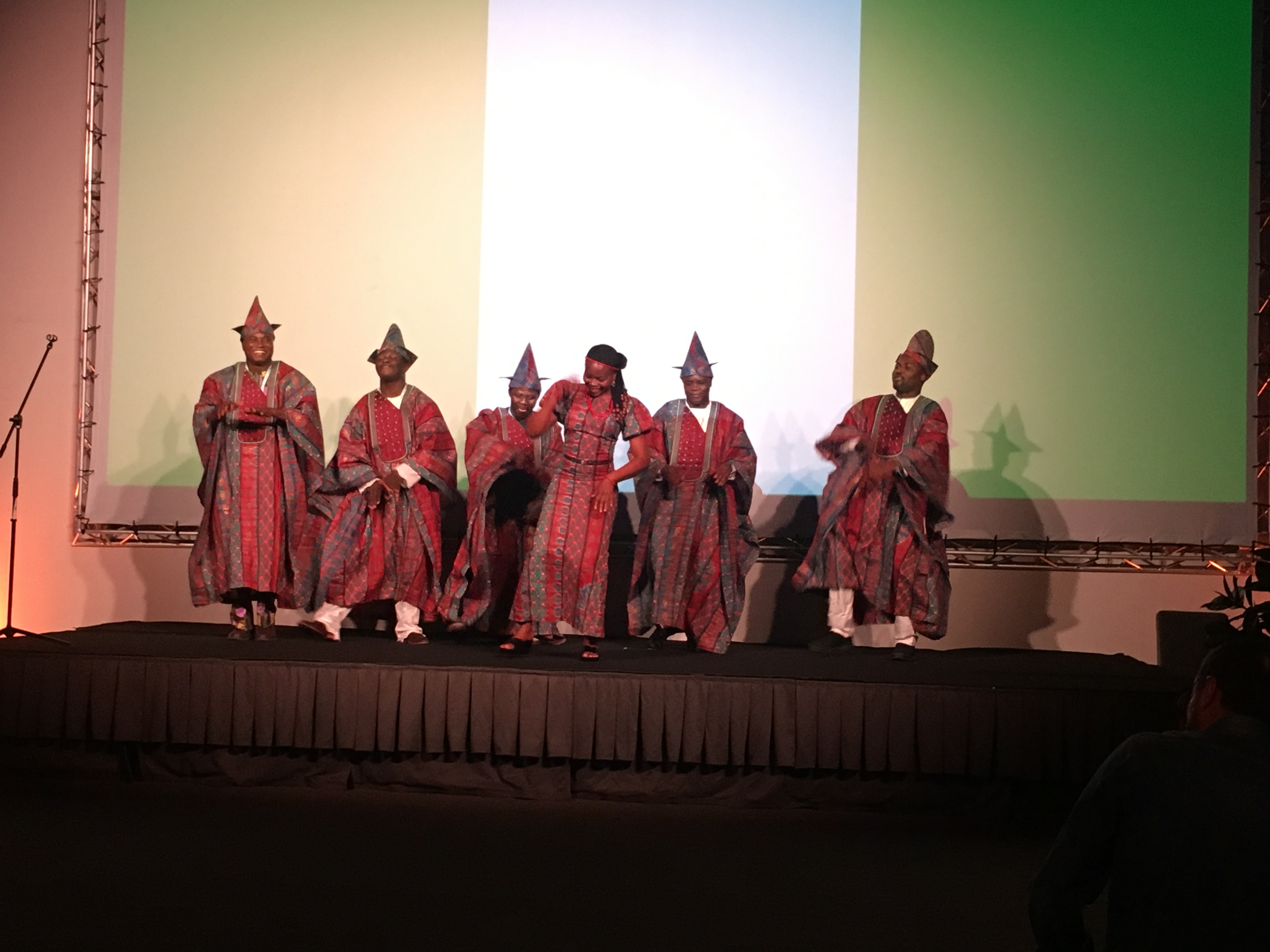 Each country seemed to have something that was unique to it – a particular folk dress, dance or song.

But we Americans are a mish mash of many cultures. We do not have one native costume or dance. As a result, our delegation has resorted to some fairly pathetic efforts in the past, including square-dancing (without practicing) and performing the hokey-pokey.

As ambassador, I was in charge of this cultural presentation. Hoping to avoid a poorly choreographed line dance or a repeat of the hokey-pokey, Susie and I decided to have everyone wear baseball hats or jerseys and sing “Take Me Out to the Ballgame”. But we were worried this would look lame (for perhaps good reason), so Susie and I agreed to provide a visual distraction that might hide our lack of creativity or choreography.

We dressed as Lady Liberty and Uncle Sam, our camp July 4th costumes.

So this was not our most dignified moment.

But it was fun. And it was a huge hit. We posed for pictures and selfies with over 100 people, so it looks like our ruse worked.

At least it was not the hokey-pokey.