We often warn parents that letters home are more interesting than life at camp.  At least, they can be more dramatic.

We had a camper first term that wrote home bemoaning his debilitating case of bronchitis.  His mother, having never heard from us, called terribly distraught.  Is he OK?  Why was she not told?

A bit of research revealed that he had come to the Health Center daily to get zinc oxide to avoid getting sunburn.  But there was no mention of any breathing issues.

We went to the boy and got this explanation.

"I had a cabinmate that was wheezing a little.  I was worried that it could be bronchitis.  I then coughed twice in an hour, so I thought I too might have bronchitis."

"But you never came to the health center?"

"And you, in fact, did not have bronchitis."

"But you told your mother you did have it."

"Well I could have."

"Was that the wrong thing to write?"

Worry not, my friends.  Our family has the same syndrome.  Today we got a letter from our 13 year-old daughter with two ailments.  First, she bravely joined her friends for a morning jog despite "her hurt foot".  "I probably forgot to tell you about the fact that I jammed it and it hurts REALLY bad, but I jogged anyway."

The highpoint is the outside of the envelope (pictured here): 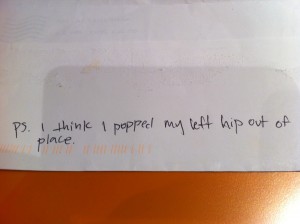 "I think I popped my left hip out of joint."

No additional explanation.  No story about her trip to the infirmary or the diagnosis.  Instead, we are left with the visual picture of our darling daughter prone on the ground, clawing her way from activity to activity.  In my mind's eye, I see her as the girl in Andrew Wyeth's famous ""Christina's World".  [BTW, I bet you were not expecting a Fine Art reference in today's blog.  We are nothing if not eclectic.]

The following are ailments reported directly to parents and the actual diagnosis.  Please note that these reports to the parents are always accompanied with a distresssing "and no one is doing anything" comment:

"Broke my nose" (was really) "Hit nose and had mild swelling"

Please know that we will call if your campers sees the doctor, sleeps in the Health Center or misses multiple activities due to an illness.  If you get a letter describing a terrible infirmity (amputation, ebola virus, disco fever) but you have NOT heard from us, chances are that your camper is taking artistic license.

Perhaps the ultimate example of unnecessary child-induced panic was during the Camp Champions ski trip in New Mexico.  We had a 13 year-old camper snowboarding when he went off the trail into a snow bank.

He felt stuck and worried.  He was 5 feet below the trail and 10 feet to the left.  He had to decide what to do next.

Nope, he improvised with another option.  He called his mom.

Frantic, his loving and worried mom started to call every mobile phone she could think of - mine, Moak Sir's, Susie Ma'am's.

Please note, she has never been to the ski resort nor does she have the name of the run he was on.  While she is desperately trying to save her son, he remembers that he can unbuckle his boots and walk out.  He remembers where he had promised to meet his friends.  He remembers that the camp photo was at 5 PM.  He forgets only one thing.

To call his mother back.

Meanwhile, we start to conduct a search.  I am wondering if we will need St Bernards to go hunting for our lost campers.  Around this time, he slides up happily on his board. "What's up?" he blithely asks.

This story was sponsored by the "We Love Them, But Can Never Completely Believe Them" Foundation!  Striving to bring you a less dramatic tomorrow.