22 is becoming my favorite number.  It was the length of our huge family trip this last school year. We spent 8 weeks in Europe, 11 weeks in Asia and 3 weeks in New Zealand.

Also, I was also always a big Emmitt Smith fan, #22 when he played with the Dallas Cowboys.

I am an even bigger fan now.

I am excited to announce the creation of “Team 22”.

Team 22 is a group of high-potential boys and girls (age 11-13) who will be attending Camp Champions this summer.  Their primary sponsor is Pat and Emmitt Smith Charities.  Pat is a television personality and speaker.  She is one of the loveliest people I have ever met, with a deep desire to impact children.  Emmitt, of course, is a former Dallas Cowboy running back that holds the record for the most rushing yards in the NFL. (Susie says I need to add that he won Dancing With the Stars.)

Last weekend, Pat and Emmitt hosted the Emmitt Smith Celebrity Invitational and 1992 Super Bowl Reunion in Dallas to raise money for Team 22.  Here is a picture.

Susie and I were there to meet our future campers’ parents and to thank all the people who helped make the event a huge success.  Frankly, I felt a little odd among some of the greatest athletes I have watched for years.  I felt more than a little odd standing next to Ed “Too Tall” Jones.  Ladies and gentlemen, he is truly too tall.  Susie Ma’am took this picture and said that I rose up on my toes to get a little extra height (I had no awareness of this).

Once we got past the initial unease, I was delighted to learn that most of the athletes have a strong desire to impact children.  Many asked questions about Camp Champions and our program.  Other shared stories of their children and their camp experiences.

It made me realize that children are the great equalizer.  Sure, some of these people are world famous, but when they talk about their children, they become simply parents.  We had a blast swapping stories of kids with this august group.

One of the highpoints of the event for us was standing at the 18th tee box with Nyle Pruitt, the “Nyealator”.  Nyle does two things very well: he hits golf balls over 400 yards and he raises money.  As each group came by, he would promote Team 22 and the other charities and ask people to make an additional contribution.  He would then hit 4 balls on a par 5 and let the team choose the best of his drives for their first shot.  He hit 5 drives over 420 yards and raised an additional $20,000 for the program.  I hope that one of these was 422. (keeping with the 22 theme)

Here we are with Emmitt and Nyle.

Please let me share a little more about Team 22.

Here is how Pat and Emmitt explain it, “Our son attended camp last summer.  Three weeks seemed like a long time for a 9 year old, but he did not want to leave.  We noticed huge growth in him after camp and decided that Camp Champions would be a great gift to children that cannot afford it.”  We are looking for “Little Pats and Little Emmitts” – talented and motivated young men and women who simply need additional opportunities to realize their full potential.

The program starts with a 3-week session at Camp Champions, but will continue throughout the year with mentorships, service projects and special opportunities (for example, yesterday they met the First Lady).

I designed the application and read all of the applications (along with Susie Ma’am).  We read about how they would like to improve their neighborhoods.  We read about their dreams and their accomplishments.  One boy described how he stood up to a bully.  One girl explained how she helped her mom establish a tamale business.   There were an impressive set of over 50 applications.

We decided to interview just 20 for the initial class.  While we eventually want to have 22 team members, we wanted to the first class to be small to assure that we can execute at a high level.

Pat, Kit Sawers (an amazing woman who is the VP of the Foundations) and I interviewed the students from 7 schools and came up with 10 fantastic students: 5 boys and 5 girls.  Here they are on the same stage that the 1992 Cowboys were on just minutes earlier.  Rich Eisen (formerly of ESPN and now with the NFL Network) introduced them just as he had the Super Bowl Champs. 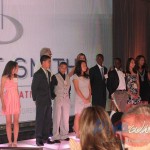 You may notice that there are only 7 of them.  The other 3 were on a school trip last week and could not make it back.

I am so excited about this program for several reasons.  First, these are great kids who will be fun to have at camp.  Second, they are helping make Camp Champions more diverse.  It is a source of frustration to me that camps are typically Caucasian.  Since I believe that camp is the most powerful youth development experience other than quality parenting, it is almost tragic that few ethnic minorities get the benefit of the experience.

Finally, it is helping raise awareness of the summer camp experience.  Each of the attendees heard about camps in general and Camp Champions in particular.  They also saw that Pat and Emmitt had decided that the experience is powerful enough to deserve the creation of this program.  For 2 committed camp professionals, that is pretty darn cool.

If you have an interest in helping with Team 22 or any of our other scholarship programs, please let me know.  We want more kids to attend camp. We are committed to running one of the best programs in the nation.  Running a state of the art camp is an expensive endeavor.  Having ways to help families with lower incomes attend is deeply satisfying.

PS  The tournament was 22 days before the first day of camp!

PPS After I graduated from Harvard Business School, I joined a Fantasy Football league with my best friend from school.  We played for two years and won both times, enabling me to buy an armoire for my very patient wife.  We still call it the “Emmitt Armoire”.  In our best year, we had both Emmitt and Hall of Fame running back Marcus Allen.  I told Emmitt this and he insisted that I have a picture with him and Marcus.

Marcus committed “Hey Emmitt, I guess we are in the furniture business”.  This truly amuses me.