How Camp Teaches That Failure Can Lead to Success

I was driving my thirteen-year-old daughter, Virginia, in the car yesterday.  For those of you who have children older than the Barney the Dinosaur years, you know that you’ve lost your ability to choose the type of music played in the car.  You’ll get your choice back when your kids are old enough to drive – but this will no longer be relevant because then you’ll lose your car to the same children.  Virginia is my youngest of four, so I’m familiar with this event.

A song called “Live” by New Republic came on.  “This song reminds me of camp”, Virginia said. “You mean because you might use it for Sing Song?” I asked.  Sing Song is a beloved camp tradition where our girl campers re-write the lyrics to popular songs to reflect their favorite memories of camp and then perform on a special night.   “No, because it reminds me of how I feel at camp.”  “A boy band makes you feel like you do at camp?” I asked.  “Mom, this is not a boy band!  A boy band is where everyone in the band sings, you know like One Direction where Liam, Harry , Zayn….. each sing separate parts.  Here only one person is singing.  Mom, you have to be careful.  You can’t just throw that term around”, states an impassioned Virginia. OK, I’m digressing.

“Why does it make you feel like camp does?”  I ask.  “Because I am not afraid at camp.”  This is a powerful statement so I start making non-committal noises like “hmmm” because I’m desperately curious, but worried that if I ask an actual question, we might get diverted like we did on the boy band topic.  Virginia starts her teenage girl ramble.  I’ll spare you the “likes” and “you knows” and filter it for actual content. 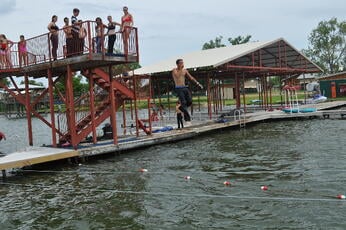 “At camp, I focus on the goal and not the fear.  The song says, “I hope you jump but don’t fear the fall”.  You know you have to fall, it’s part of jumping, but it’s hard not to fear it.  At camp I’ve had to try many times to waterski, serve during tennis, hit the archery target etc.  The first time I tried out for Jam Session (the camp dance team) I didn’t make it.  But at camp I’m more interested in seeing if I can achieve my goal rather than fearing the process - waterski wipeouts, double faults etc.  I don’t focus on failure because failure doesn’t seem very important.  Everyone fails on their way to achieving their goals.”

Wow! I squeak out “Do you feel this way at school?”  “No!  At school people care if you fail, they judge.  If I get a bad grade etc., my friends will be sweet, but other people will be secretly glad.  At camp, everyone wants everyone else to have fun and succeed.  There is no class rank, no grades, no winners/ losers.  At school, if I don’t make the tennis team, it matters because it’s the whole season and I don’t have other options like I did for Jam Session when I just switched to the archery team.  Plus at school, only the people who are good at tennis try out.  At camp, there are so many activities, and most of which no one has done before camp.  So at some point, everyone is a beginner.   At camp I feel like I have room in my heart for everyone to win and no one cares if I mess up one time or a hundred.  So I don’t care as much if I mess up.”

I kind of welled up, which I immediately tried to hide because it horrifies Virginia.  But what a life lesson.  What a gift that camp has given her!  Virginia is always curious about the seemingly random, and in her mind, inexplicable things that move her mother to tears. So she asked me my thoughts on the song, on life, on camp.  I said that I was grateful for camp in her life because it’s made her a fuller person with varied interests and more important, a person who is willing to take risks.   Dealing with failure is a scary thing and, like most people, I still struggle with it at times.  I fear the fall.  But the beauty of camp is campers get used to “mini-failures” in a venue that doesn’t keep score.

None of us would be where we are today if it we didn't learn that failure can lead to success.  Young children learn to walk and don’t fear the failure of landing on their bottoms in the attempt.  To them, “failure” is synonymous with “trying”.  Somewhere along the line, failure takes on a element of shame.  So it’s not so much the fear of failing that motivates us, but the avoidance of shame.  A pianist doesn’t fear the wrong note in practice, but is mortified by that same wrong note in performance.  At camp, everything is practice and failure is a temporary state on the way to success.   Remove the “shame” from “failure” and it becomes a positive – “trying” then and ultimately, “perseverance”.  After all, how does one persevere if success happens on the first attempt?

So that’s one of the many reasons I love what camp does for my children.  It teaches them that failure leads to success with effort and determination. It helps them “learn to walk” on the stage of adulthood without shame when they inevitably fall on their bottoms.  That was a remarkably insightful conversation with Virginia.  I really need to thank that boy band.