We lost another child. Before you call Child Protective Services, allow me to plead my case. After the Virginia excitement at the Alhambra in Granada, we sat down and created a family plan.

If anyone is ever lost anywhere, he or she will return to the main entryway of wherever we are.

We created this plan since it would apply to whatever location we found ourselves in.

Welcome to Versailles, a location able to show us the error of our ways. Our plan depends on 2 critical words in the sentence: “lost” and “entryway”. First, it requires that the lost person know that he of she is lost. Second, it assumes a central entryway.

We had neither today. Each of us was appreciating the opulence of the palace, armed with detailed individual audioguides). The crowds were massive, so we were watching Virginia like a hawk. We also kept Terrill in view. The boys – we were checking regularly, but heck, they are almost 15 years old.

As I mentioned previously, Wiley marches to a drum none of us hear. He got a little ahead of us on the tour and then assumed he was behind us. So he sped up. But he remained interested in the tour, so he just walked faster while still listening.

We went for perhaps 30 minutes before he realized that he was really separated form us. He kept expecting to catch up, particularly with his new rapid pace. Meanwhile, he was still walking along. Remember the part about the “lost person knowing that he was lost”? Wiley did not.

After a while, however, he realized we were not there. Being a smart fellow, he remembered our agreement – meet at the entryway.

The challenge here was determining what location counts as an entryway at the most massive Palace in the world? The ticket buying gate? The security entrance? The initial gates? Perhaps the audioguide area? Wiley check all four – as did we. The problem is that we were always at different places while looking for each other.

The remaining 5 of us developed a plan. One group would go through the museum all the way looking to him. Another would go to a guard and ask about separated people. The final person would wait at a central location in the courtyard.

After the search through the palace failed (BTW, Wiley did the exact same thing -hustling through the museum a second time- but he was either a handful of rooms ahead or behind), one of the teams headed to the Gardens. We had said that “after the Chateau, we will go to the Gardens”, so we thought he might be there. It was there that Liam and I found him. He had gone through the Chateau twice (like Liam) looking for us, gone to each of the 4 “entryways” and then decided we must be in the Gardens.

About this time, Susie has found the head of Information, who spoke very broken English.

In 4 hours at Versailles, we only heard the PA system once: “Will Wiley Baskin please return to the front office? He is a 14 year old, he is one and a half meters high and weighs 50 kilograms. He is wearing an red jacket and black shorts.”

Like Louis XIV, Wiley made an impression at Versailles.

All of this after we had reunited.

Ultimately, we had some excitement due to the fact that he was trying TOO hard to find us and we were just missing each other. Nevertheless, we had a great day with the French Royal home.

Hanging with Louis the Fourteenth.

With that confession behind me, please let me describe our day. We woke early. The kids were not excited. In fact, they were perplexed why we were attacking the morning so aggressively.

We were off to visit the greatest palace ever built – Versailles. We know about Louis XVI and Marie-Antoinette. The French peasantry rose up and rebelled against the opulent and indulgent ruling class. Both of them ended up in the guillotine once the peasants rose up

I have always associated Versailles with the excesses of the French rulers – powdered wigs, stockings, hunts, music and fake canals. [Note: they built a one mile canal and imported gondoliers from Venice to staff it. Wow.] But there is more to the story than I knew before

We were off to visit the greatest palace ever built – Versailles. Here is the modest backyard. 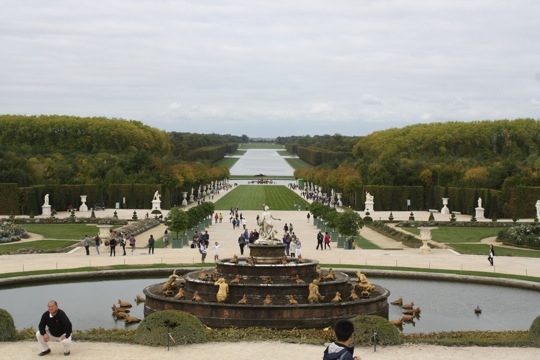 The modest Hall of Mirrors (kidding- the are massive!). 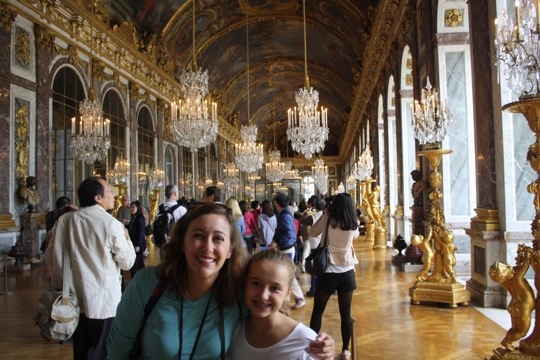 A modest fountain. This is Apollo, god of the sun. Louis XIV called himself the Sun King, so they were tight. 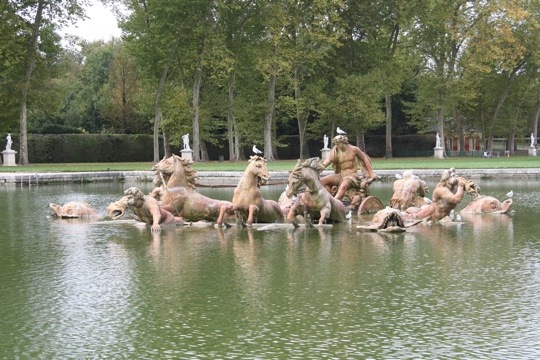 The kids think we could have a nice camp here.

Louis XIV was a very impressive man and ruler. He was a great general, a musician and an inspired ruler. I thought Versailles was about wealth and parties, but Louis XIV had a real plan. In a land full of court intrigue and aristocratic manipulation, Louis created a clever plan: move the capital from Paris. Build a place everyone would want to go to, then require that they be in court. Then make sure they are well entertained and happy, while keeping an eye on them at all times. Doing thus, Louis was able to control all aspects of his court.

I was surprised that Louis spent hours every day on the affairs of state. He was a great leader and king. He reigned for almost three-quarters of a century.

Two rulers later and heads were rolling in Paris.

We ended the day with a 3 hour walk in Montmarte (the tallest hill in Paris and he sight of the Sacred Heart Church – the white Byzantine-styled cathedral at the top of the hill). Here it is:

We are weary. We are also glad we are Texans and not in the French Court of the 19th Century!