Rabbit Wrangling and Being a Director

In the last 18 months, both Susie Ma’am and I attended our 25thbusiness school reunions.

We found both delightful and encouraging. Gone was any competitive posturing of previous reunions. Our 5thand 10threunions seemed full of discussions of careers. We all seemed focused on convincing each other (and ourselves) that we were “successful” in our jobs.

The 20thwas less about career competition, but had an element of parental competition. We heard many parents explaining that their children were geniuses or future Olympians. [Note: I have had a parent explain to me that her 8 year-old son understood “string theory”, a highly complicated theory from particle physics. Even people who understand string theory (and there are just a few thousand in the world) are not sure they really understand it. I am sure you are not surprised that the 2ndgrader did not, in fact, understand string theory or any other theory of quantum physics.]

But at the 25threunions, virtually everyone seemed to be in a comfortable place – generous of spirit and self-effacing. We all joked that our parental certainty eroded as our children became teenagers and – well – acted like teenagers. There is nothing like raising children to semi-adulthood to humble you. We also realized that our relationships were more important than our jobs.

This maturation and positivity was the top aspect of these gatherings. There was one other impression that we came away with:

We have a weird job. As people talked about their normal jobs (that seem to involve words like “desks”, “weekends” and “adults”), we felt a tad like people who play-act at working. One of our friends asked us to describe a normal day in the summer.

We have a standard reply, “Each day is kinda similar. I wake up at 7AM and then it changes.”

So let me share some specifics from today. Susie Ma’am and I started this one unusually. We let Dodger Ma’am (the camp basset hound) outside early when we woke. We were up about an hour before the rest of camp. She started to bark oddly. The two of us, still in our morning robes, went outside to discover that two bunnies from the petting zoo were loose. We had to chase them.

By the way, bunnies are really fast.

So we began the day as rabbit wranglers. [Note: there are no photos of this fiasco, which is a bit of a shame. We were not particularly graceful or good at it.]

Over the course of the day, we were also washed pee-sheets (if a camper has an accident, we do not want other campers to know – so the counselors quietly remove the sheets and we wash them in our house), served a meal in the Fillin’ Station (I like to try to learn names while serving breakfast), refilled a slushy machine 4 times, talked with several parents, held a Leadership meeting and hosted 8 cabins (4 each) in our home for Friendship Games/Man Cave.

Please allow me to explain this last item. It will also help you understand why we are part-time slushy experts.

Susie Ma’am and I realized years ago that we were not getting enough hangout time with campers. We knew who was homesick or who twisted an ankle, but we got very little time to just have fun.

The answer was Friendship Games (for the girls, hosted by Susie Ma’am) and Man Cave (for the guys, hosted by me). In each case, a cabin comes to our home for a slushy, snacks and playful talk. These cabin meetings last an hour and are one of the highlights of every session for us as much as the campers. The feature photo and this one are from two such gatherings. 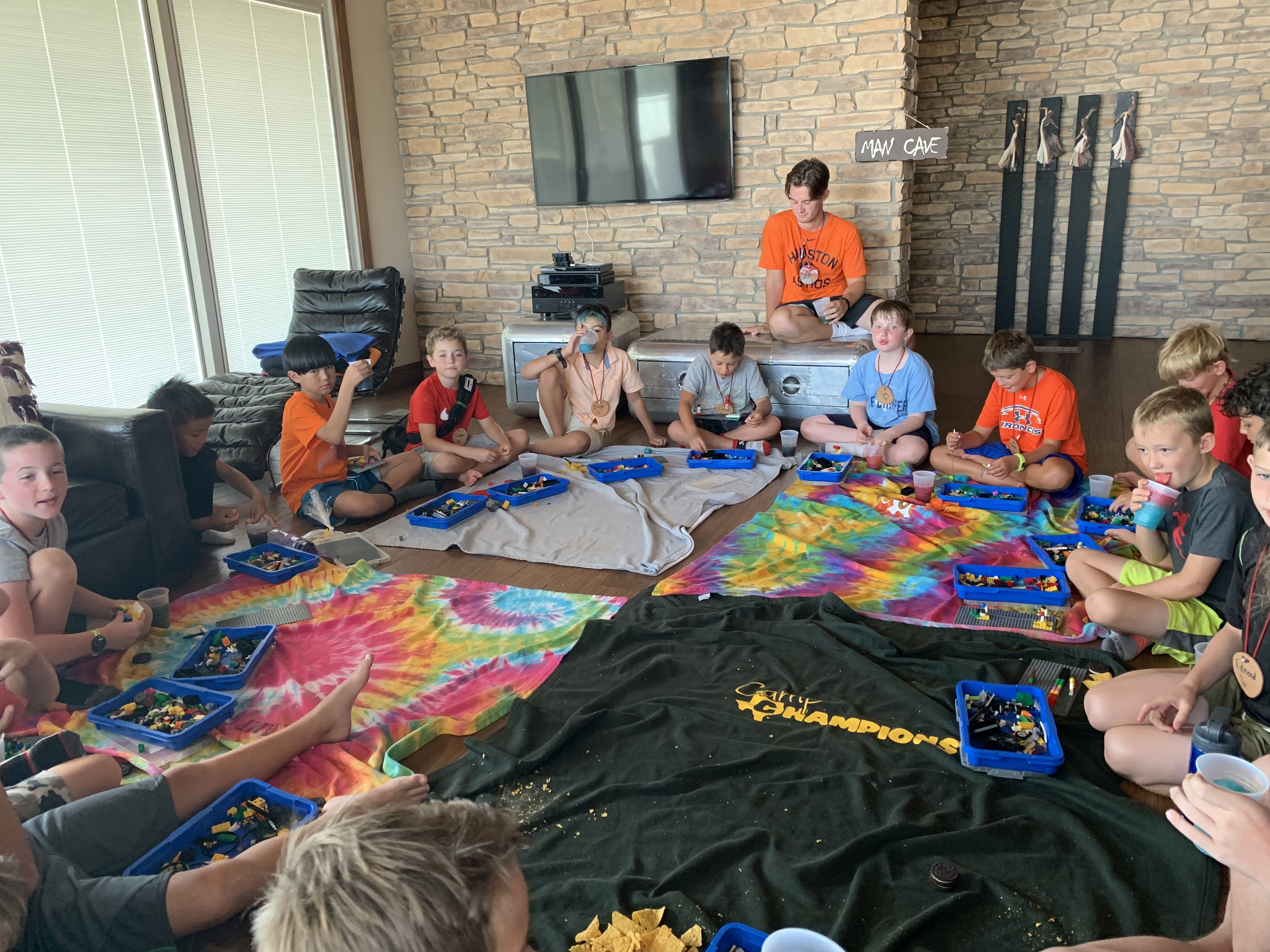 To round out the day, we can also add amateur blog writer, photographer, song leader and meeting facilitator to our list.

In the last week, we have also needed to be meteorologists, town criers, song leaders and the subject of multiple jokes.

I hope you do not think we are complaining. Instead, I simply want to share a tad bit about how odd life can be at camp.