Today we have a special treat - Susie Ma'am is our guest blogger!

We are staying at a lovely little hotel in Bali recommended by a friend. I feel a great kinship with the owners (Chris and Alona from the US) whose philosophy is to invest and empower their employees and support their decisions. At Camp Champions, this makes for happy employees who want to impact the lives of their campers and counselors. At Ngeluwungan hotel, this means that the employees are learning English, getting medical care, being housed and fed nutritious food. One employee explained to me that when he started here in 2013, there were only three people in his family. Now he has thirteen people. By family, he’s referring to his fellow employees.

Despite their goal of learning English, my questions are sometimes unanswered. Or, rather, they’re answered with a beautiful big smile and “no problem”. So I don’t know the “Seeds of Hope” tradition was a staff request or an initiative of the owners. “Seeds of Hope” is a local orphanage that Ngeluwungan Hotel. Every Saturday, the staff cooks food for the 67 orphans and serves them lunch. Then on Sundays, 10 or so orphans (the orphanage creates a rotating schedule) are invited to swim and partake of the Sunday evening BBQ at the hotel. Every week, the staff donates 25% of their tips to the orphans. The orphanage is supported by other local businesses and overseas individuals. While we were there, a large donation of food arrived - as well as tourists with candy. (Eagerly welcomed although amazingly, the children stood in line and no one pushed or seemed impatient.)

Virginia and I accompanied the staff to their visit to Seeds of Hope on Saturday and helped serve food. It was a fascinating addition to our international orphanage tour. This orphanage works so well because of the Balinese perspective. The Balinese are very accommodating, loving and peaceful people. They value harmony and elevate the concept of family over that of the individual. The orphanage is run by a 72 year old woman, Sandra, who I suspect has MS. Her voice is faint and she explained that her illness makes it difficult to talk and walk. Her husband, Tommy, and their two adult children also live at and work at the orphanage full time. Sandra explained to me that 17 years ago, when she started the orphanage, the kids called her Mama. The recent batch calls her Oma (grandmother- a Balinese word first introduced by the Dutch who previously controlled Indonesia).  When I commented to her that the children looked healthy and well fed, she smiled and answered “and cheeky too”. Sandra ran an orphanage in Java for 20 years prior to this one. A combination of a Balinese husband longing for his homeland and a successful self-running orphanage in Java prompted them to start anew in Bali.

Seeds of Hope has no employees. None. No administrators, cleaners, cooks etc. The children essentially run the orphanage with everyone pulling their weight. The older children take care of the younger children. The children take turns cooking. Everyone is responsible for cleaning bedrooms and common areas. Sandra explained to me that Indonesian kids need to be totally self-reliant no later than age 15. (Why 15? I couldn’t get an answer other than “they have lots of responsibilities so they need to grow up fast.”) The local public schools are within walking distance of the orphanage and everyone attends school. A few girls proudly showed me their uniforms.

When the children have disagreements (rare, says Sandra) the offending child sits with her and is required to talk about the other child’s feelings. Sometimes a group of children will get together and talk about how the actions of an individual affects the feelings of a group.   I spoke with many of the older children and there is such a feeling of overwhelming gratitude that Oma Sandra has created a safe place. A few commented that they’d be sex workers out on the street. So no one wants to ruin this safe and caring home.

Seeds of Hope supports children through graduation from university. The students must major in English and another subject. I spoke with two university students and both study the hospitality industry. A good choice in an island heavily dependent in tourism and she has a 100% university graduation rate and job placement for all her orphans. Three months (max) after graduation, they must move out. Sandra has learned that it takes recent graduates 2-3 months to transition to independence.   By independence, she’s referring to emotional independence as all of the children are physically self reliant at a very young age. But in a culture where generations all share the same house and people rarely leave home, leaving the family of the orphanage is a difficult step. She also requires that the grads pay for the school fees of another child – a family friend, a cousin etc. as repayment for their time at the orphanage. (They are not allowed to support another child at the orphanage.) The schools here are “public”, but like the schools we saw in Africa, uniform and book fees can be a major impediment to attendance. I suspect that “adopting” a needy child, helps to mitigate the emotional void created by moving out of the orphanage and creates a new sense of belonging.

Virginia and I have added Oma Sandra to the list of women we’ve met who are changing the world through educating and caring for future generations. Here are the two we met in Africa:

BTW – Mandy got official permission from the Tanzanian government to move into her new orphanage.  We are thrilled!

Virginia met a girl her age and had to share some difficult infomation with her.  [Note: I marvel at the difference in two young women who are the same age.] 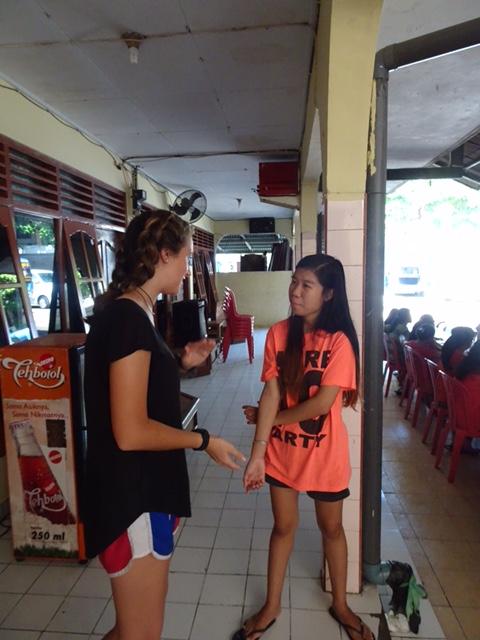 Apparently, she is a huge Justin Beiber fan, but an ill-informed one.  When Virginia suggested that Beiber has gone "off the rails", it created dual confusion.  First Virginia needed to explain what the term "off the rails" means.  Second, she had to console her new friend regarding the decline of the Beibs.

When Oma Sandra suggested that some of the orphans were "cheeky", I knew that Paul was among those thus accused. 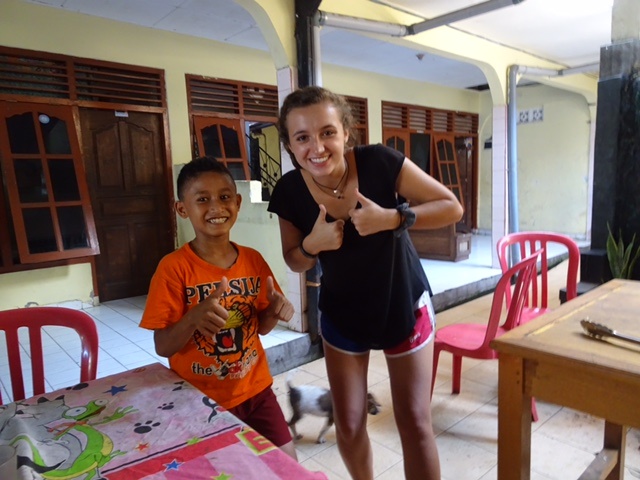 His English was quite good and he enthusiastically practiced on us.

I also enjoyed getting some alone time with Virginia. It can be hard to be the youngest with three recent high school graduates who all have shared experiences. Virginia is truly great company and I relished a chance for some one-on-one time.