Our final day in Copenhagen was also a big walking day.

I envy the walkability of European cities.  Don’t get me wrong – in Texas the car is a valued and necessary friend that makes our lives extremely easy and provides us great flexibility.  I am not saying that we should all move to Copenhagen.

What I am saying is that walking these cities provides several great gifts for our family.

First, when we walk, we also talk with each other.  We share ideas and observations.  We constantly shift whom we walk next to and chat with.  In a car, we often end up listening to the radio or playing with electronic devices rather than talking with each other.  When we do talk, it is a group discussion.  Here, we find ourselves enjoying long stretches of relaxing bonding time, both as a group and as individuals.

Second, it encourages discovery.  The pace of walking allows us to truly see what is around us.  We notice not just the stunning buildings and statues, but also the retiree walking his dog, the canal full of boats and the young couple chatting by the bay.

Third, it resets my internal clock.  I am no longer on modern time with instantaneous communication, 24-hour news cycles and text messages (OK, it helps that the phone is off too).

Finally, walking is great exercise.  I have always been an intense exercisers.  Susie Ma’am mocks me for pushing too hard.  I want to run hard playing tennis, ski bump runs and lift more than I should.  She preaches moderation and consistency.  I should know better than to argue with her because I proved her point inadvertently 25 years ago.  I spend a year studying in London where I walked everywhere, but did not “official” exercise.  Upon returning to the States, I resolved to get myself into shape: I would swim everyday until I was fit enough to swim a mile.  I hit the goal on my first try.  The regular walks had, in fact, been marvelous conditioning.  We should all return feeling great.

As I read this list (regular conversation, discovery, relaxed tech-free pacing and exercise), I am reminded of so much of what I love about Camp.  As I have written below, I think we often lead lives that are running on a clock different from the one we are meant for.  We also have become less connected with the outdoors.  I am not talking about deep hikes into forests here, just sunshine, breezes and grass underfoot.

As I was saying, yesterday was another marathon walk.  We went by the National Opera House and picnicked by the canal.   We visited Our Saviors Church, a stunning building with a corkscrew spire that visitors can climb. 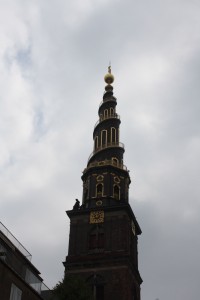 400 steps and 300 feet later and we had a fantastic panorama of the city. 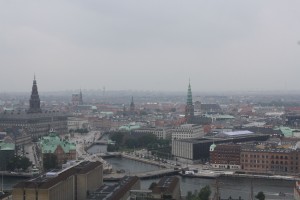 A City of Spires and Canals

The climb was a nervous endeavor.  Despite iron sidings/handrails, we felt quite exposed and precarious during the ascent.  Here is a picture as we descended. 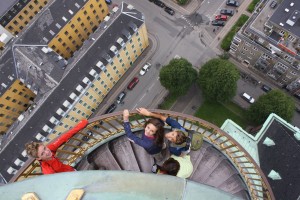 The oddest part of the day was a stroll through Christiania, the hippie commune 10 minutes from the city center.  This community has less than 1000 residents, but it has an odd origin.  A group of squatters began to live in old military barracks in 1971 and declared themselves home.  Many European countries have laws favorable to squatters and less favorable to land owners than we are accustomed to.  It did not take long before this group became noted for two attributes: 1) their disregard for Danish drug law and 2) their access to highly adept legal help.  This group was apparently completely against any and all hard drugs, but they really REALLY embraced marijuana.

The Danish government resolved to enforce their anti-pot laws aggressively in 2004.  SInce then, a trip through the area will always reveal either open pot smoking or walking police, but never both.

I am somewhat fascinated with their legal triumphs.  They are allowed to stay and occupy land that must be worth hundreds of millions of dollars.  They pay roughly $1 million annually for their utilities and that is it.  Every time the government attempts to remove them, they fail.  Roughly one decade ago, the city just gave up and told the national government to take over.  Here is my question - who are these lawyers and who is paying them?  They are winning tough cases, so I assume that they are not high, which means (almost by definition) they are not residents of the commune.  If not, are they getting free graffiti at their offices?  Lots of woven goods?  Bob Marley t-shirts to go with their suits?  I assume there is a great story here and I want to hear it.

One last note.  Their flag is a red background with three yellow stars.  What must the symbolism mean?  What were they thinking as they designed it?  Apparently, nothing and nothing.  They found buckets of red and yellow paint in the barracks and decided to go with that.  Wow.

We are in a small battle about journaling.  We are asking the kids to write each day.  We found some inexpensive and durable word processors off eBay. The AlphaSmart 3000 looks like the keyboard for a 1980’s clunky computer, but they are light, hard to break and more than adequate for daily writing.

While all of the children hope to avoid the task, each has taken to the challenge differently.  Wiley quietly hopes that we will not ask about it.  Liam writes with a vengeance.  He strives to use sophisticated syntax and language, so his writings either read like a college student’s or an awkward adolescent trying to sound like an adult.  Terrill is dutiful and disciplined.  Virginia wants to make everything a team effort, soliciting first Susie and then my opinion of every idea.

Terrill prefers journaling about the events of the day.  Liam and Virginia like to tackle creative assignments. For example, “pretend you are a rent-a-bike in Copenhagen” or “imagine that your parents were on the other side of Berlin from you when the wall went up”.  You know, light stuff.  Wiley seems equally ambivalent, but is plowing ahead.

The hard part about writing is the fact that we do not have a standard schedule.  We humans are so much more effective when we become creatures of habit.  With an ever-changing schedule, we often find ourselves at the end of a day asking, “have you written your journal yet?”

I know that they will treasure them when they are done, so we are willing to be the bad guys.

We arrived in Copenhagen to discover an apartment that is wonderfully located . . . and massively tilted.  Not quite Leaning Tower of Pisa tilted, but askew nonetheless.

I am including several photos to convey the magnitude of this anomaly. 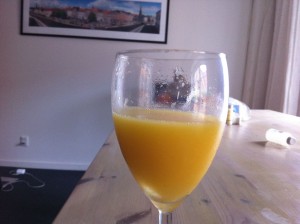 The next report will be from Germany!  Until then, make time for a walk!